How to Reach Bandhavgarh 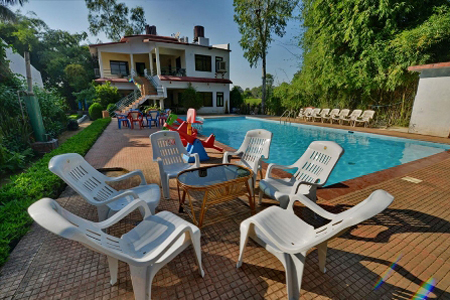 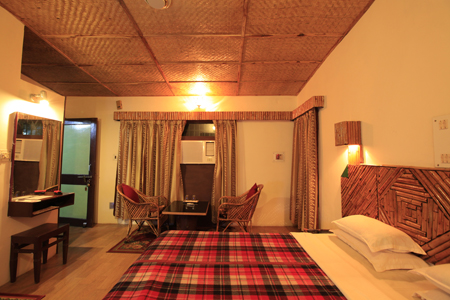 Bandhavgarh is densely populated with other species. Bandhavgarh is sided with great cliffs and eroded rocks and on its highest point stands "Bandhavgarh fort" thought to be some 2,000 years old. Around the fort, are numerous caves containing shrines and ancients Sanskrit inscription.

The vegetation is chiefly of sal forest in the valleys and on the lower slopes Bamboo is found throughout the park. Bandhavgarh forest, as a Shikargah, or game preserve, of the Maharajas of Rewa.

Bandhavgarh National Park as an unspoilt national habitat for a variety of wildlife peculiar to the area. These includes gaur (Indian bison), sloth bear, leopard, porcupine, wild boar, sambhar and spotted deer, among others and of course, the tiger.

The reserve named after the highest hill Bandhavgarh (807 m) in the centre of it, falls between the Vindhyan hill range and the eastern flank of Satpura hill range and is located in Umaria districts of Madhya Pradesh. A chain of smaller hills, 32 in all, surrounds this hill, forming a number of valleys and spurs interspersed with low lying areas, such as Chakradhara, Rajbahera, Sehra-Dadra, Bhitri bah, Kolua bah etc. Since the main formation is of sandstone, water percolates through it forming a number of perennial streams and springs. The hills are mainly flat topped. The meadows in certain areas are marshy.

The Sal & bamboo covers plain tract and degenerates in growth and quality as it ascends the hill slopes, further giving place to mixed forest on upper slopes, mainly due to edaphic factors.
Few rare species like insectivorous plants Drocera peltata and medicinal plant like Buch (Acorus calamus) are found in some isolated patches of Tala ranges of the Reserve.
Rivers Johilla and Son flowing on the boundary on the eastern side, river Umrar passing through western fringes and the Bandhavgarh hill, which is visible from as far as 30 km, are some of the landmarks of the Reserve.

Mythologically the fort was built by Lord Rama for his brother Laxman, during Ramayan period. There are a number of man made caves (35) in Bandhavgarh with inscriptions and carvings, which date back between about 129-168 A.D. Statues of various incarnations of Lord Vishnu, which were carved out of single rocks are found in the fort. "Sheshshaiya" the statue of lord Vishnu in reclining pose is the biggest of all and attracts every tourist. These statues date back to 10-11th Century A.D.
The Bandhavgarh Fort, in the centre of the Reserve, atop the Bandhavgarh hill, was the seat of rulers of Rewa State, until they shifted to Rewa town in 1617 A.D. After independence and abolition of the princely States, the process of degradation of forests started due to relaxed control. Maharaja Martand Singh of Rewa, was deeply moved by the destruction of forests. On his proposal an area of 105 sq. km. was declared as National Park in 1965. The area of the park was increased to 448.84 sq. km. in 1982.
Bandhavgarh has been an excellent habitat of tiger and is known for the highest density of tigers in the world. Considering the importance and potentiality of the National park, it was included in the Project Tiger Network in 1993. The adjoining Panpatha, Khitauli and Maghadhio Sanctuary too was declared as a part of the Reserve.

Park entry time is according to season, depending mainly on the sunrise and sunset, To travel into the lush green jungle of Bandhavgarh.

The best time to visit the park, keeping all aspects in mind, is between December and February but it is the warmer months of April, May and June that are best for tiger sightings. During the summer months, most of the animals are seen around the few precious water bodies not yet vaporized by the intense heat.

Bandhavgarh experiences climatic conditions that vary to opposite extremes. In winters, the bitter cold forces the visitors to pur on multiple layers as protection against the biting cold. Early morning rides can be in temperatures that dip about four, once you take the wind chill factor into consideration. In the summers, it changes drastically to the opposite. It now fee is uncomfortable to even sometimes put on the cotton t-shirt. The temperature in the winters varies from 4 to 20 degrees centigrade between November and February. In the summers, the temperatures move to the other extreme and can go up to 48 degrees centigrade. Towards late summer, it is also advisable to carry some protection, for yourself and for your cameras, from rain. Bandhavgarh has an average annual rainfall of 1200 mm. The rains here give very little prior warning and and it is preferable to be prepared for your own protection, as well as for your equipment. These rains, however, bring good respite from the blistering heat. A single shower can make temp erasures fall from 45 degrees to 30 degrees centigrade. The main monsoon season mostly begins only once the park is closed from 1st July to 15th October.